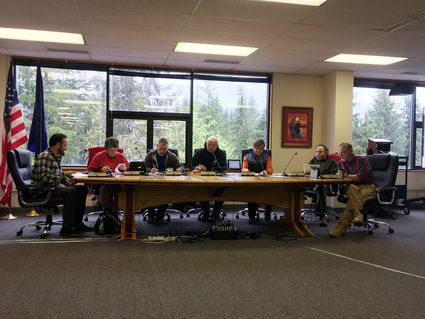 Due to the Municipal Building renovation the Petersburg Borough Assembly now meets in the Conference Room upstairs in the Hallingstad-Peratrovich Building.

The Petersburg Borough Assembly approved this year's $9.6 million budget after reallocating it's community service grant funding where it reduced funding to Petersburg Mental Health Services for the first time in decades.

The assembly reduced PMHS funding by $20,000 and directed it towards Petersburg's domestic violence prevention and victim advocacy non-profit Working Against Violence for Everyone (WAVE).

Annette Wooton, WAVE Director and it's only full-time employee, this year made a one-time funding request of $46,000 to weather a gap year loss of state funding. In the previous two budget readings, assembly members voted to partially fund WAVE but some members alluded to decreasing PMHS funding and redirecting it towards WAVE.

"WAVE is a critical piece of community infrastructure," Stanton Gregor said. "I stress the word critical. Further they're the only agency who has stated that this request is a one-time request. This is not a long-term financial relationship they're looking for."

According to its submitted balance sheet PMHS has $874,263 in the bank and $2.7 million in total assets. PMHS typically receives $85,000 annually from the Petersburg Borough. PMHS offered to reduce it's funding request to $75,000 if the Assembly would give the other $10,000 to WAVE. Assembly Member Eric Castro thought the organization could afford to take a bigger cut.

"So we remove the $20,000 from that and they're still looking at over $50,000 of funding which is greater than any other community service aspect portion of the budget and with their residual money they have saved up for 22 years of hard savings. I still feel that they have the ability to get through this short period of time, this single year, better than WAVE does," Castro said.

Assembly Member Nancy Strand asked Borough Finance Director Jody Tow if there was any other place in the budget the money could come from. Tow said they could draw from the $90,0000 budgeted contingency funds or from the anticipated $23,000 budget surplus.

Assembly member Bob Lynn and Mayor Mark Jensen both said they weren't in favor of digging into contingency funds. Assembly member Cindi Lagoudakis asked if there was a way to identify that the assembly would fund PMHS's additional request if there is indeed a surplus at the end of the budget cycle.

"We don't know until we've been audited and we get that financial report in December what our true surplus is for the year if we have a surplus at all," Tow said. "It's kind of difficult to promise an organization money that we won't know until the next fiscal year."

PMHS finance director Kathy O'Rear asked the assembly to consider taking WAVE's funding out of the borough's reserves and that not funding PMHS would make it more difficult for PMHS to secure state grant funding.

"They've (Alaska Department of Health and Social Services) asked for grant applications," O'Rear said. "It's not guaranteed we're going to get that money. If you cut our local position back it shows the state the locals don't support mental health to the degree that it did before. It will also directly affect what we can do with our partners, which here in the community are the police department, the hospital and the school system."

The assembly ultimately voted 6-1, with Strand voting against the motion, to reduce PMHS funding to $55,000 and provide an additional $20,000 to WAVE-funding that organization $45,000 in total.