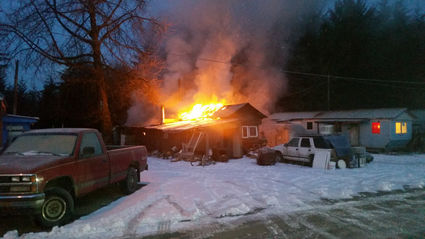 Two fire trucks and the ambulance responded to a trailer fire at #11 Lumber Street shortly after 6 a.m. Monday morning. The property was in the process of being condemned by the Borough Building Department. Dave Berg, Fire Dept. spokesperson said someone may have been living in the structure that had a wood stove, but no power hook-up. Two fire extinguishers had been emptied at the scene, according to Berg. The fire marshal will investigate the origin of the fire, but Berg said it may be difficult to determine. Fifteen firefighters responded to the scene according to Berg.