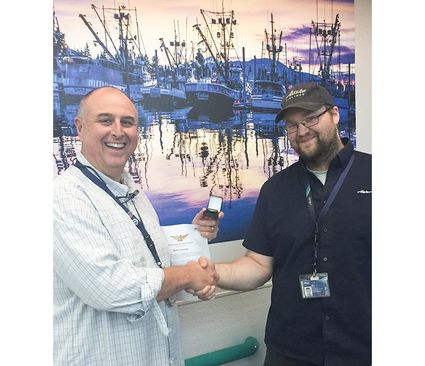 Skyler Cummings, right, being presented with a Safe Operations and Awards Recognition by David Booker, Petersburg customer service manager with Alaska Airlines. Cummings received the award for bringing attention to outdated safety lines used on the Petersburg ramp, which brought about a safer runway, according to a press release issued by Alaska Airlines. The lines were used for aircraft that are no longer in service in Petersburg; as a result, current Boeing 737-700's engines were brought farther into the circle than was safe and prescribed by Boeing, according to the release. Cummings was presented with a 24k gold pin, a cash bonus and a letter commending his achievement.