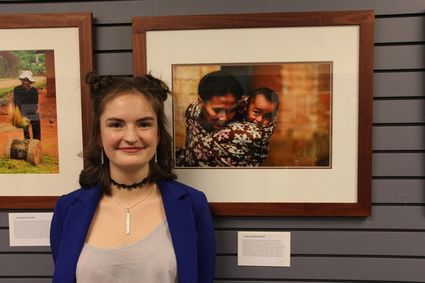 Hillary Hunter stands with her favorite photo titled Neny and Nambintsoa. Neny meaning "mother," the two were Hunter's host family during her first two months in Madagascar while she was receiving her Peace Corps training. The photo was taken during a solar eclipse. Everyone was passing around the single pair of glasses that allowed them to safely view the eclipse, when Hunter turned around and saw the two in this pose. The photo ended up winning the portraiture section in the U.S. Embassy Madagascar's annual photo competition.

Growing up, she was around people who had volunteered with the Peace Corps and was interested in living abroad. She was accepted with the Peace Corps, but due to her dietary requirements and inability to speak a second language, Hunter was eager to go whereever they could send her. She ended up teaching English in Madagascar to sixth graders and now speaks Malagasy, the official language of the island nation off the sout...