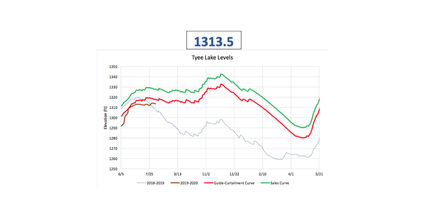 As the dry weather persists though the summer, Tyee Lake water levels continue to be below the normal levels for early August.

As part of the Southeast Alaska Power Agency, Tyee Lake dedicates its power to Petersburg and Wrangell, while Swan Lake produces power for Ketchikan. Water in Tyee Lake reached 1,313 feet Monday morning. The water level is lower than the norm for Tyee Lake this time of year, but it is higher than the water level this time last year, said Utility Director Karl Hagerman.

"The good news is that we finally achieved a level higher than last year," said Hagerman. "That's...