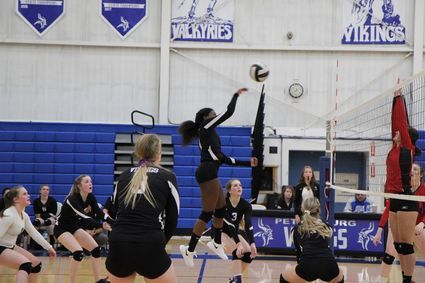 Kianna Kivisto sends the ball back over the net in a game against Juneau-Douglas High School last month.

The Vikings varsity volleyball team came out victorious at a tournament in Sitka over the weekend, after losing their first two matches of the season the previous week.

At the start of the tournament, Petersburg played four matches made up of two sets. The Vikings won a set and lost a set in their matches against Metlakatla, Sitka and Klawock and won their match against Mt. Edgecumbe in the pool play matches. Then in the single elimination bracket,

Petersburg beat Metlakatla in the semi-finals 25-22 in the first set and 25-18 in the second set. In the final match of the tournament, Peters...