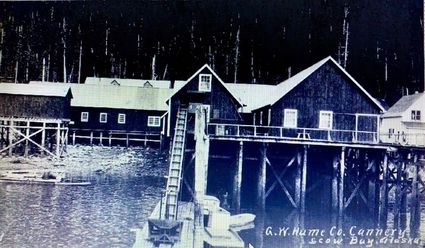 The C.W. Hume Company was founded in 1864, and initially had canneries in California. By 1922, they expanded to Union Bay and Scow Bay, Alaska.The Scow Bay cannery was originally Doyhof Fish Products, a one-line operation that operated for three years. G.W. Hume assumed operations after 1918. Over the years the company weathered controversies. Petersburg Packing Company complained that Hume had placed fish traps too close to their operations, but a judge found in favor of Hume. Hume was also charged by the Bureau of Fisheries in 1923 for throwing large quantities of a previous season's salm...