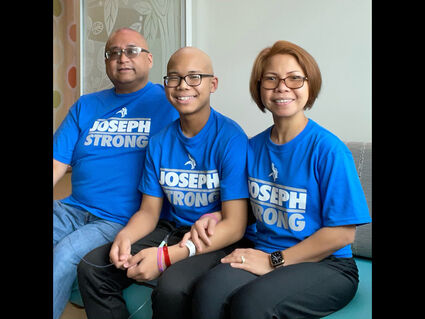 The Tagaban family sport shirts with the slogan "Joseph Strong" while in the Seattle Children's Hospital. From left to right: Ed, Joseph and Je Tagaban.

About a week before Christmas, Joseph Tagaban, 13, started experiencing a toothache in the lower left side of this jaw. His parents, Ed and Je Tagaban, made an appointment with a local dentist after the pain continued, but a lump underneath his tooth soon began growing.

Ed said he thought the dentist was just going to drain the lump and treat Joseph's toothache, but instead, the Tagaban family ended up traveling to Juneau to see an oral surgeon. The surgeon performed an operation on Joseph and sent tissue samples to a pathologist in Indiana. After an 18-day waiting period, the test results...