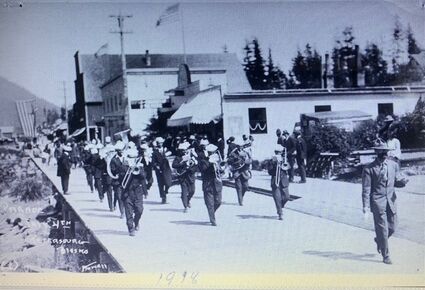 On July 4, 1918, the world was still engaged in the battles of WW1. The "Spanish Flu" pandemic had affected one-fifth of the world's population. The time zones and Daylight Savings Time were established by the US Congress. Locally, First Class steamship tickets to Seattle were advertised at $21.50; and the Bank of Petersburg boasted having a whopping $15,000 in capital. In Scow Bay, Doyhof was officially declared a post office, though one without a regular schedule. And in downtown Petersburg, Earl Ohmer was leading a snappy band of musicians in the Fourth of July boardwalk para...