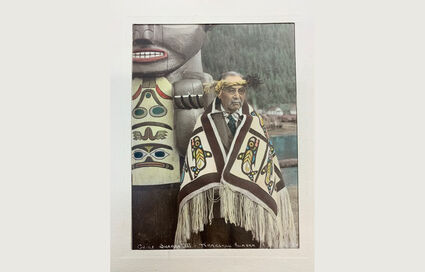 This Mary Allen photograph shows Chief Shakes VII wearing the Killer Whale Flotilla robe. Charlie Jones was the nephew of Chief Shakes V. Tribal titles traditionally transferred from uncle to nephew, but United States law did not account for this. When Chief Shakes VI died, his widow kept all his property rather than pass it on. In 1940, the Civilian Conservation Corps built the community house in Wrangell. At that time, as successor to Chief Shakes VI and as someone well-known and respected, Charlie accepted the title of Chief Shakes VII. He died in 1944, the last known Ch...