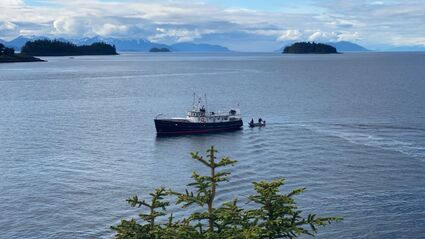 After dropping off a gift of much needed coffee and baked goods to a solitary lighthouse keeper, the Urschels skiff back to the Endeavor, briefly anchored off the rocks of Southern Five Finger Island in the middle of Frederick Sound.

Though the call for adventure never ceases, even the crew of the Endeavour needs to take time to rest and take stock of the year's expeditions.

Captain Bill Urschel, his wife Patsy, and their dog Bella live aboard the ship in North Harbor and are wintering in Petersburg for their second year in a row.

The Endeavour, named for the ship Captain James Cook commanded on his first voyage of discovery, is a 72-foot U.S. Army T-Boat built in 1954 that has seen many names and many places over her nearly 70-year life.

Completed after the end of the Korean War, the ship served as a ferry for passenge...