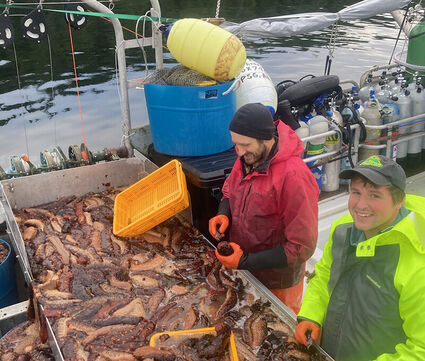 On the deck of the F/V Happy Time, Eric Grundberg (left) and Alec Schramek process sea cucumbers during a recent dive opening in Snow Pass.

The 2021-2022 Southeast Alaska sea cucumber season is expected to surpass the current three-year rotation's harvest record according to Whitney Crittenden, an assistant area management biologist with the Alaska Department of Fish and Game in Ketchikan.

This season has the highest region-wide GHL ever seen for the current rotation, despite one area being closed due to a low number of sea cucumbers according to Crittenden.