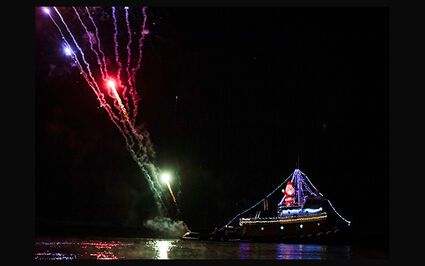 Petersburg Rotary Club's Christmas Light Boat Parade returned to the Wrangell Narrows for its second year on Saturday evening. The brightly decorated boats-which included a tug boat, a scow, a sailboat, a yacht, and a kayak-proceeded from Scow Bay to Frederick Sound under the light of the full moon. A cash prize was on the line, with the winner determined by votes cast over social media. The Western Mariner, calling themselves Santa's Tannenbaum Booms, launched an impressive display of fireworks from the tug's stern and took first place in the contest.