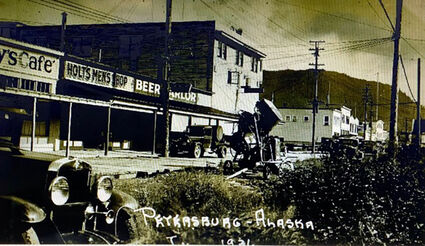 Sammy's Cafe boasted it was "The Best Place to Eat" in 1930's Petersburg. Sammy Nakamoto, proprietor, also farmed. He once had mink escape after road blasting blew a hole in their pen. Nakamoto was involved in multiple enterprises, having moved to Petersburg from Wrangell in 1918. He then bought the Good Eats Cafe which he later named Petersburg Restaurant and finally upgraded to S.K.'s Cafe in 1934. Born in Southwest Japan, Sammy lived in Petersburg for almost 30 years. In 1938, Charles Mann wouldn't renew the cafe lease because a totem stood out front. It was removed and purchased by Unit...