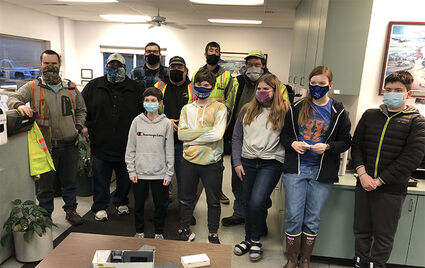 After presenting their loading dock design project to staff at the local Alaska Marine Lines facility, students on the robotics team were given AML hats which they wore to the state competition.

The Mitkof Middle School robotics team traveled to Anchorage to compete in the state tournament on February 5, and though they did not place, the experience gave the team some insight into what state level competition looks like.

The team got the opportunity to compete in the state competition after placing first in the innovative project category for their presentation on a cargo transport system at the local Alaska Marine Lines facility during the regional tournament in December.