PMC staff give a review of their new medical records system 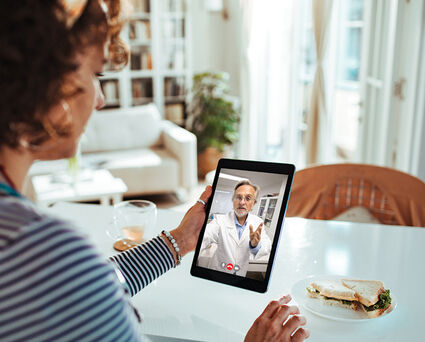 Petersburg Medical Center staff are continuing to adjust to the new electronic medical record implemented by Cerner last December and are now seeing some of the advantages the new system has to offer.

Kirsten Testoni, the home health manager, said nurses are able to use the system on their tablets when they go out to see patients, allowing for easier access to information.

"It's happening in real time as opposed to having to come back, log into the computer, and that kind of thing," Testoni said.

"If nurses have a question about a med or something that was changed, they can just log right in, right when they're with the patient, and take a look at that."

"We didn't have any real changes in our process other than the registration is different and so that's one of the things that we're working still to get used to," Bryner said. "Some things are much easier and other things are not quite as easy."

Cerner has also brought with it increased standardization and clinical documentation within the system according to Chief Information Officer Jill Dormer.

"In this system, it's the same, it doesn't matter if they're in the clinic or in long-term care, their documentation, you know, medication orders, is all the same, it's all the same screen," Dormer said.

"It's been nice for them and that efficiency and they also have the ability within Cerner to customize certain phrases that they just say all the time and so it's been a lot faster for them."

Clinic Manager Kelly Zweifel added, "I would say the look and feel of the document after you complete it just looks nicer. It's like easier to read and...it's more concise and it looks nice and it's easy to find."

The new system is also linked to existing systems in the hospital including the radiology system which Sonja Paul, the radiology manager, said lets patient reports "flow back and forth," requiring a lot less manual input from technologists than before.

Because of the system's widespread use in other medical facilities, Electronic Health Records and Technology Systems Lead Matt Pawuk believes travelers and new employees could also benefit when they come to Petersburg.

"So people come in like, oh yeah I've used Cerner before, whereas our other system, it was not as widely used so...there was, I think, more of a training that had to happen before they felt comfortable in the system, whereas I think people will pick this one up quick," Pawuk said

Patients will also see improvements in their interactions with the system according to hospital staff including faster access to lab results and patient documentation, the ability to communicate to their care team through the portal, automatic appointment reminders, and other patient engagement tools.

On the financial side, Carrie Lantiegne with Patient Financial Services said the new system includes more options for online payments and that because the system is more automated, claims can travel through the system faster.

"If there's issues...we are notified immediately, we can take care of them before it even goes out to insurance so the whole process for the billing cycle is much quicker and it gets statements to patients a lot quicker than it used to." Lantiegne said.

She also said that since there are still insurance claims processing from the old system, patients can expect to receive information from both the current and previous systems until all of the claims on the old system are completed.

The new referral system is also an improvement according to Zweifel who said it is now easier to send and receive referrals and allows for better follow-up tracking.

"It allows for like faxing within the system, you know, versus like having to print things and fax it and manually scan them in," Zweifel said.

"We can attach documents that are needed for those referrals kind of within it and fax it to the facility in just a more streamlined process."

As with anything new, staff said it will take some time to learn and feel comfortable with everything that is in the new system.

"That muscle memory is not there yet so it's just learning what each of those pathways still is," Paul said.

Testoni added that the new documentation has "a lot of hard stops" which forces staff to fully complete certain screens or questions before moving forward which can sometimes be frustrating when trying to learn the new system.

"We don't have the experience yet to be able to go back and go, oh that's what it is," Testoni said. "We're getting there but, it's definitely, it's a positive and a negative."

According to Dormer, the hospital had used its previous system, which saw its own major upgrades including the addition of the ER system and the changing of physician orders, for a little over 8 years.

Under the previous system, Dormer said PMC also had all of its servers on-site, allowing the hospital to have complete control over when updates would be implemented.

"The new system, with it being cloud-based, they just tell us like, your update's coming and we'll provide the education," Dormer said.

"It's scheduled and we can't really push it out and so that part will be different."

Dormer reported that Cerner generally has system updates once or twice a year.

Going forward, she said they are looking to interface Cerner with more systems running in the hospital while making sure that future updates fit together smoothly within their system.

According to Dormer, the hospital is currently close to finishing the final phase of the roll out of the new system, which includes payroll and time and attendance software, and expects it to go live on June 2.