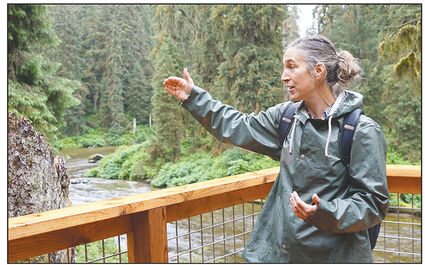 Tory Houser, program manager with the U.S. Forest Service, talks about the new deck and shelter at the Anan Wildlife Observatory on June 21. Construction of the old deck and shelter has been com- pleted under a $989,800 federal contract.

WRANGELL – The final inspection took place on June 16. An entirely new observation deck and shelter are still fresh with the smell of sealant. Anan Wildlife Observatory is almost ready for visitors at the start of the permit season on July 5.

Even though the observatory is ready, plans are not flush to open the popular bear-viewing site, U.S. Forest Service staffers say. One thing blocks the way before people can arrive.

"We are having complications with getting our toilets pumped," said Tory Houser, program manager with the Forest Service in Wrangell. "It is really, really challenging because they have to put a pumper truck onto a boat big enough to bring a big truck, then bring it up here on the high tide and have a tube big enough to (pump) a 750-gallon tank."

A contractor has been ready to make the one-hour, 15-minute trek from Wrangell, but the business needs to change its address with the federal government. Houser said the contractor has been working on getting the change made for months but hasn't been able to do so just yet.

"We want people to know we're trying really hard to have it (pumped) by opening," she said. "You know, getting the deck done was a piece of cake compared to getting the toilets pumped."

The new observatory was completed in less than four months. As soon as the snow melted off, Rainforest Contracting out of Petersburg began demolition of the old observatory and started the new build. Each day, work crews would trek a little over a half mile from the Forest Service cabin on Anan to work on the new build.

"The biggest challenge was being prepared, being ready," said Jesse West, president of Rainforest. "It could have gone wrong for us, but it went pretty well. We had planned ahead well. We had built the trusses and shaped posts, then broke it down and brought it over in pieces."

Each of those pieces was flown in by helicopter, then set into place by the work crew.

Houser said the idea to replace the old observatory deck and shelter came around 2017 when various fixes were being done. A contractor at the time said the old deck needed to be stabilized. She said the Forest Service worked with a design service in Juneau, then the design was vetted by Forest Service engineers as well as outside engineers. Input was also sought from outfitter guides as to what they would like to see in a new structure.

The new deck is 18 inches higher than the previous one and goes out an additional eight feet over the creek. The shelter was moved back, since the old one tended to block views. Small solar panels are installed that will help power cameras and viewing screens that will add to the visitor experience, though those will not be installed until next year. There are cameras installed at the upper falls and underwater cameras will be installed below the observatory.

An old 1943 quarter was found during the demolition phase and it will be mounted in an interpretive panel, which will include information on the bears and on the history of the observatory.

"That's a requirement with the state historic preservation office," Houser said. "The shelter that was here was historic. By removing it, we were having a negative impact on that historic quality. As a mitigation to that, we're doing an interpretation on that structure."

With raising the deck 18 inches, a thoroughfare of sorts is created for bears to pass underneath the structure.

"It will be interesting to see how the bears utilize under the deck because on the old deck with it being 18 inches shorter, there was a lot of areas that were hidey holes that the bears would crawl under," said Kayleigh McCarthy, a biological technician with the Forest Service and Anan staffer for the season. "There was one habituated resident black bear that would take naps under the deck. You'd see his paws sticking out."

McCarthy said since underneath is now less cave-like, she anticipates the bears using it as a passageway to get to the creek. "I have a feeling there's going to be a lot of fish scraps underneath at the end of the season." 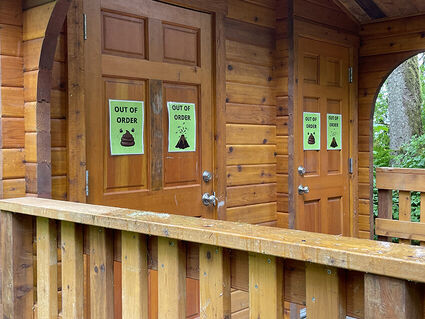 The public restrooms at the Anan Wildlife Observatory trailhead need to have the 750-gallon-capacity toilets pumped before the observatory can begin to receive visitors for the opening of the permit viewing season on July 5.

The lower deck of the observatory is still the same as before, however plans are being made to remove the old structure and replace it with a two-deck building and a spiral staircase to reduce the footprint. A timeline for that project hasn't been set yet.

Throughout the visitor permit season, through Aug. 25, an estimated 2,400 people will come through Anan. Three Forest Service staffers will be on duty each week, McCarthy said, one manning the trailhead, one person manning the deck and one on break but at-the-ready in case they get swamped. Those staffers also track the bears, making sure to observe any changes in appearance or behavior.

In addition to the new upper deck, gravel work on the trail to the observatory was completed last fall. The public toilets are the only thing left on the agenda for this year.

"We are completed. We are checked off on this deck. It is ready for business," Houser said. "We are so excited to welcome all of our visitors."