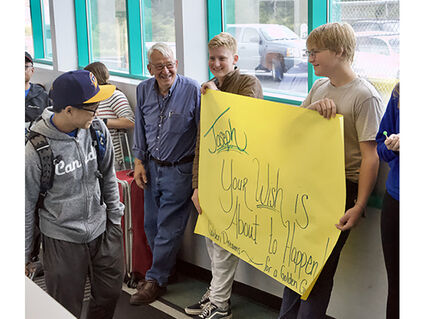 Joseph Tagaban reads a sign as he walks into the airport which says "Joseph your wish is about to happen! Golden dreams for a golden guy!" From left to right: Joseph Tagaban, Don Koenigs, Markus Anderson, and Erik Thynes.

Joseph Tagaban was surprised by family, friends, and teachers at the airport Wednesday afternoon before what he thought would be another trip to Seattle for a medical appointment related to his cancer treatments. The group revealed to him that in actuality, his wish was going to be made true by the Make-A-Wish Foundation and ESPN and he was about to leave for California to meet five-time NBA All-Star and four-time NBA champion Klay Thompson of the Golden State Warriors. "This is crazy, that's all I've got to say, this is crazy," Tagaban said. "I never thought that it would've come true, lik...