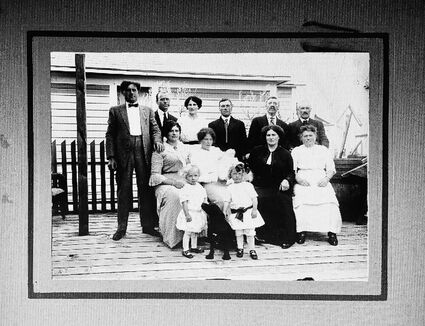 Petersburg residents, circa 1917, include Brackney, Klabo, Norberg and Enge family members. Front right is Alice Norberg. As a young girl of 14 she "ran off to Hollywood", according to a Saturday Evening Post article in 2012. Alice became a vaudeville performer and stand-in "screamer" in horror films, allowing the more famous actresses to save their voices. After changing her name to Terry Walker, she was chosen by Norman Rockwell for a 1935 Saturday Evening Post cover, which transformed her into a Hollywood "it girl" for a time. She was in 16 films, the last was in 1944 with Bela Lugosi. Photo found in the Clausen Museum collection. Information and photos for this column are provided by the Clausen Memorial Museum.