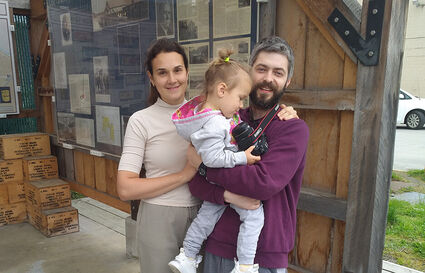 When Arsen Tatizian arrived in Petersburg earlier this year he did not think he would be staying in Alaska beyond the end of his contract with OBI-much less with his wife and his daughter at his side.

The Ukrainian first stepped foot in Little Norway on February 6.

It was his second year working for OBI, though he spent his first summer at their plants near Wood River and Larsen Bay.

He was only here for two weeks before Russia invaded Ukraine.

While he continued with work, his mind was on the safety of his wife Snizhana and their two-year-old daughter Kateryna, or Kate in English.

They were living in Odessa, a port city on the Black Sea in the southern region of Ukraine, when the invasion began but after a week of air raid sirens they decided to move farther away from the rocket attacks.

Snizhana and Kate returned to their home in Izmail, a city along the Danube river which borders Romania, where they had lived before moving to Odessa in search of opportunity.

Though they were safer there, the threat of war loomed.

"The war didn't come there yet but the fear of it that it will come soon," Arsen said.

"So I am far away and they don't know what happens tomorrow so that's why I decided to try to bring them here."

In his discussions with other Ukrainians at OBI he heard about Uniting for Ukraine, a government program that allows Ukrainians to come to the United States.

A requirement of the program is to have a supporter in the United States who agrees to provide for arriving refugees during their stay and after a friend of his, also from Ukraine, applied and was accepted as a sponsor he decided to give it a shot.

"When I heard about it, I tried to become a sponsor for my family and here we go," Arsen said.

He took a day off from work and spent 12 hours filling out forms online as part of the application process and after another two days of waiting he was approved.

Though it was a moment of great joy to know that his family would be able to come to the United States, it was also a moment of great difficulty as he set out to plan their journey and prepare for their new life that would begin in just two weeks.

For many parents, managing a two-year-old would be the hardest part of long-distance travel but this was entirely new territory for Snizhana.

She does not speak English and had never traveled by plane before, so before they left she downloaded an offline translator app and learned as much as she could about airport travel.

"It was difficult but it was an opportunity we can't miss so she had to do it," Arsen said.

While Arsen was planning their trip, a community-wide effort mounted to prepare for their arrival in Petersburg.

He shared his plan with Ola Richards, who first met Arsen through a group of Ukrainians working at OBI whom she had befriended earlier this year, and Oksana Tolkachova and they began discussing what could be done to help and soon brought Cindi Lagoudakis into the conversation.

"It started small from like talking, just what we could do and then...the ball just started rolling," Richards said.

They spent the next 14 days brainstorming and working to reach everyone they could in Petersburg to help get accommodations for when they arrived and would meet with Arsen over his half-hour lunch and dinner breaks.

On the other side of the world, Snizhana and Kate were getting on a bus in Izmail to travel seven hours to Bucharest, Romania.

From there they flew to Frankfurt, Germany where they waited for six hours before the largest leg of their journey-a 10-hour flight to Anchorage.

When they arrived they were greeted by Jessica Bringhurst Hill, who is from Petersburg but now lives in Anchorage.

She had seen a Facebook post made by Richards' sister-in-law asking if there was anyone in Anchorage who could host them and volunteered to pick them up from the airport and gave them a place to stay and food to eat.

Over the next two days Snizhana filled out paperwork and applied for benefits with the help of Zori Opanasevych of New Chance Christian Church's Ukraine relief program, which Ashley Kawashima had gotten in contact with.

"So people help us on every step and every step we make we always see the help from people, so I'm very grateful to the community. I love the Alaskan community," Arsen said.

And after being apart for half a year, Snizhana and Kate arrived in Petersburg on August 11 and the family was reunited

"When I saw them, I just hug them, kiss them," Arsen said.

"It was finally, just finally thank God we are together and safe."

Before Snizhana and Kate's arrival, the group working in Petersburg were able to find a place for them to move into after contacting Sarah Holmgrain with Petersburg Properties who said two apartments had just opened up and met with Arsen to quickly secure one of them.

More people also joined in to help with organizing including Chelsea Tremblay as they formed a group message to coordinate assistance.

Soon, baby clothes, diapers, a stroller, food, kitchenware, and other household items started filling Richards' yard as people, many of whom were anonymous, dropped off what they had to offer.

"It all started super small, just us talking about how we can help him and the family, and at some point it was so overwhelming, but like you think about overwhelming as a negative thing but it was overwhelming because there was just so much love and support coming from Petersburg people," Richards said.

Many also have helped with the cost of their rent including HIP and Holmgrain's family.

As donated items came through, Richards, Tolkachova, and Lagoudakis would collect them and drop them off at the apartment.

"When they put everything inside the house I was at work. I [wasn't] involved in this so I just came and it's like all done. I mean, I don't have words, I don't know what to say. I'm grateful for all people," Arsen said.

They have since been adjusting to life in Petersburg, and they do plan on staying beyond the end of Arsen's contract with OBI.

"They just rest, eat, sleep. Doing the things they used to do. Just live their life, safe with smiles on their face," Arsen said.

"Kate, she is, for this half year, she changed, very much changed and I see her happy. Never seen her before like this, she is very excited and my wife too... just happy."

He does hope to eventually return to Ukraine, and possibly spend their time living between the two countries, but thinks that it could take years for them to go back if the war continues.

Arsen is currently in the United States through an H-2B visa, which OBI has also extended, but he is now applying for temporary protective status and has scheduled a trip to Anchorage to complete the process.

After his season with OBI is over he is confident that he will be able to find a job and he aspires to return to repairing computers, cellphones, and TVs, which was his regular job in Ukraine.

Snizhana used to work as a hairdresser and hopes to find work after she learns English, which Arsen is currently teaching her using the same books he used to learn it.

As the summer fishing season winds down Arsen is also eager to spend time with his daughter and hopes to buy a guitar and eventually teach her how to play when she gets older.

Though Snizhana and Kate are with him, his mother and grandmother are still living near Odessa.

He said they are safe at the moment but he has been talking with them about the possibility of them traveling to the United States too.

Arsen also gave his thanks to Richards, Tolkachova, Spigelmyre, Jeff Hupp, Martha Johnson, Nikolai Wendel, Pete Brantuas, Bryan Dennis, Karen Hofstad and all the others who have welcomed him and his family with open arms.

"At this point actually still not believe that all this happened to me. Like you know it's like dream. Someone pinch me," Arsen said.

"When my wife is happy, when my child is happy, no matter what I do, I'm happy too, so my task is to make their lives good. That's all I want."