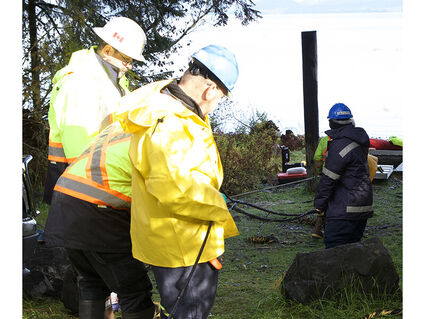 Alaska Power & Telephone crews were working next to Outlook Park on Tuesday to install a SEALink submarine fiber optic cable, which will run from Juneau to Prince to Wales Island with an overland crossing on Mitkof Island. The project will have terrestrial network build-outs in Coffman Cove and Kasaan, which currently lack broadband service, according to AP&T. The IT Intrepid cable ship has laid the cable from Juneau to Petersburg and was headed to Coffman Cove Wednesday night where it planned to install an end of the cable before laying cable up to South Mitkof Island according to AP&T's Vice President of Business Development Jason Custer. A full story on the cable installation will be featured in a future edition.