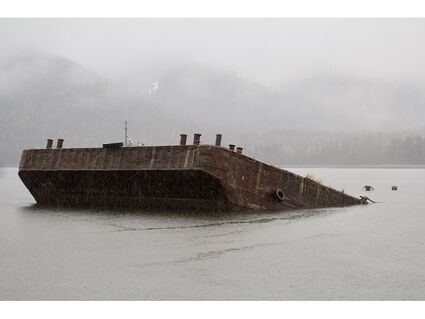 The barge sits partially underwater Wednesday morning just off the beach in the Wrangell Narrows during low tide.

A barge is now partially submerged in the Wrangell Narrows near 4 Mile Mitkof Highway after taking on water.

The barge, owned by Charles Davis, initially began sinking on the morning of Oct. 15, causing the creosote pilings, beams, and dock sections on the barge to roll off into the water.

Davis said they are not sure what caused it to start sinking but that after it began they moved the barge to the beach and spent the day working to contain the mess by keeping what was on the barge from drifting away.

He said they spent the next ten days cleaning off the barge, pulling everything out of t...