In closely watched Alaska U.S. Senate and House races, outcomes will take 2 weeks to be determined 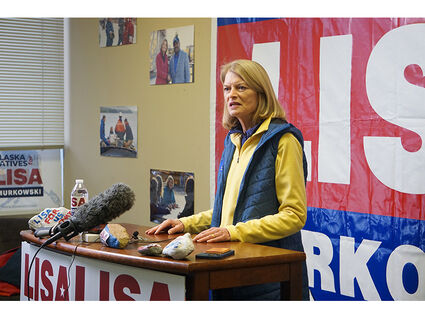 Sen. Lisa Murkowski speaks on Election Day at a press conference held at her campaign headquarters in Anchorage.

The nation's eyes are on the U.S. Senate and House races in Alaska, but anyone wanting to know the outcome will have to be patient.

Defending their seats are two high-profile women. In the Senate is Lisa Murkowski, a Republican who voted to impeach former President Donald Trump – and who has been the target of ire from Trump and from hard-liner conservatives. She trailed Republican challenger Kelly Tshibaka by a small margin, 42.7% to 44.4% of the first 216,000 votes counted. But Murkowski was narrowing that gap and was in position to surpass Tshibaka later in November, when the ranked choice tabulation is expected to transfer most of Democrat Pat Chesbro's votes to Murkowski. Chesbro had 9.5% of the votes through early Wednesday.

In the House is Democratic Rep. Mary Peltola, who won an August special election to fill out the remainder of the late Don Young's term, becoming the first Alaska Native to serve in Congress. She led Republican opponent Sarah Palin and Nick Begich in the vote count early Wednesday, with 47.1% to 26.6% for Palin, 24.3% for Begich and 1.7% for Libertarian Chris Bye.

As is common in Alaska elections, results from rural Alaska regions – strongholds for both Murkowski and Peltola – will be slow to arrive. And under the state's new ranked-choice voting system, full results will not be tabulated by the Alaska Division of Elections until Nov. 23.

Despite the necessary wait, Murkowski said before results were announced that she felt good about her reelection prospects.

"I am extraordinarily confident with our campaign and where we are, in a winning position, and I fully expect that Alaskans will speak loudly, they will speak clearly about the values that they endorse. And I'm feeling extraordinarily optimistic about Alaskans returning me to the United States Senate," she said at a news conference held at her Anchorage campaign headquarters.

She was also optimistic about what she said is a positive example that Alaska, with its new ranked choice voting system and its history of cross-party coalitions, is setting for the nation.

"I hope that others are looking at what Alaska has just gone through, what we're finishing up now, with a recognition that things do not have to be so polarized," said the senator, who is supporting Democrat Peltola, a longtime friend and ally. "I'm hoping that Alaska once again opens the eyes of people around the country about, perhaps, a better process."

Murkowski said Alaska taught the nation a similar election in 2010, when she won as a write-in candidate.

Tshibaka, Murkowski's Trump-endorsed Republican challenger, said she also feels "excited and confident" about the race outcome, even though it will not be known for weeks.

"I'm excited because a couple of nights ago a guy told me he's voting for me because he doesn't want to be a pawn in the D.C. game anymore," said Tshibaka, who was with supporters waving signs Tuesday afternoon at the busy Midtown Anchorage intersection of the Seward Highway and Northern Lights Boulevard.

"I think we're going to get the ultimate checkmate this election and it'll be the first time in a while that the pawns, if you will, the regular people, actually get to decide for themselves, despite all the influences and all the dark money and all the power that came in to try and buy our Senate seat, I think we the people still run our country. And that's what's going to happen in this election," she said.

Chesbro, the Democrat in the race, spent much of Tuesday doing last-minute campaigning in the Matanuska-Susitna Borough, where she lives.

She said she knows that the race is largely between Murkowski and Tshibaka.

"I am kind of a realist and I understand. I've looked at the polls. I don't expect that tonight I will get 51% of the vote," she said, with a laugh.

Peltola, the incumbent in the House race, said she expected to do "a lot of pacing" as results trickled in later in the day.

She voted Friday in Bethel, she said as she stood with supporters waving signs at an East Anchorage intersection early Tuesday morning.

Still on her to-do list, she said, was ensuring that her three stepchildren living in Anchorage made it to the polling station to cast their votes.

Republican candidate Nick Begich, speaking while waving sign-waving by the same Seward-Northern Lights intersection that is popular with candidates, said he believes he has the momentum to win but that he did not want to make any predictions.

"I think we're going to wait for every vote to be counted. I think that's what every candidate should always do," he said. "We'll see what the voters think. I know there's a big red wave sweeping across the country and hopefully it makes it all the way up here to Alaska's coastline."

The ranked choice voting system has made it an unusual race, he said. "This is the wildest election in Alaska state history. If anyone says they expected this election to go as it went, they'd be lying to you," he said.

Former Gov. and Republican vice-presidential candidate Sarah Palin, who lost to Peltola in the special election, continued her criticism of the ranked choice system. It is "convoluted and complicated," she said, adding that it leads to voter suppression.

"You will talk to people who say, 'Screw this system. I'm not going to comply. I'm not going to participate,'" she said, standing with sign-waving supporters at the same Midtown Anchorage intersection. "Get rid of ranked choice voting. It should be one man, one vote."

Palin also criticized the Republican party leaders. She said they made a foolish decision to back Begich, "the guy who's never gotten the most GOP votes. I have. I've thumped him three times. We'll thump him again tonight. And yet, the GOP chose to endorse the unknown Begich from the Democrat dynasty family. It made no sense."

And she said the party establishment does not support Trump, which is showing up in party activities in Alaska. "They want to send him a message. They want to thump his two endorsed candidates in Alaska. We're like symbolic poster children for him. That's Kelly Tshibaka and me."

Despite Palin's criticism, voters who cast their ballots at the Alaska Zoo, the site of two Anchorage Hillside precincts, were comfortable with the ranked choice system, said David Karalunas, chair of one of those precincts.

"So far, all the voters have been much more positive and happier and less confused than at the primary," he said, referring to the Aug. 16 election.

Then, voters were juggling the special election to fill Young's seat, their first experience with ranked-choice voting and the regular primary election, he noted. "It was much more confusing to people,"he said. 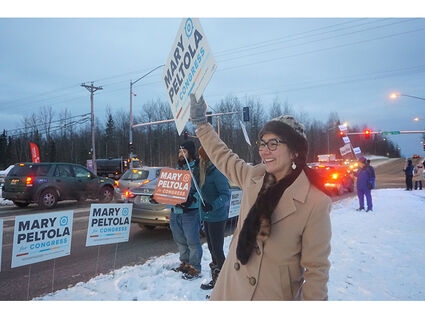 Rep. Mary Peltola waves campaign signs at passing motorists in East Anchorage on the morning of Election Day. The sealskin and otter-fur hat she is wearing was a gift from friends in Juneau.

Most polling sites in Alaska are set up at schools or community buildings, and some are in churches. But there were some offbeat locations, along with the zoo.

One was Ursa Major Distillery in Ester, a company that sells craft vodka, gin, rum and akvavit, a Scandinavian distilled spirit that is infused with herbs.

The distillery this year replaced the Ester fire station as the polling place for the quirky Fairbanks-area community. The fire station, it was determined, was too small and cramped to continue in that role, said Brenda Riley, co-owner of the distillery.

"Everybody's been so positive about the change, and they think it's the most fun place to have a polling place," she said.

But voters are not able to sample the products when they cast their ballots; the distillery pauses its business on Election Day, Riley said. "We love democracy," she said.