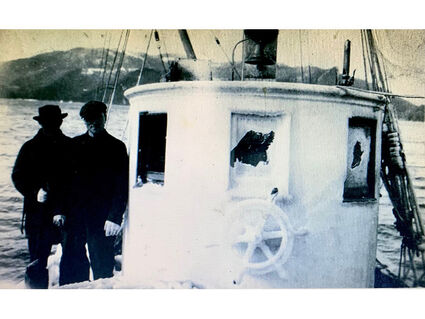 This photo was found in the Clausen Memorial Museum collection. On the icy deck of the F/V Augusta are Ole Rosvold, left, and an unidentified companion. The Augusta was built in 1914 for Martin Enge and named for the wife he married that same year. It was noted to be one of the most modern and speedy gas boats in the Petersburg fleet at that time. Martin almost lost the vessel and his life in 1935 when a cigarette accidentally dropped in the engine room caused the gas engine to explode. Martin and crew, though badly burned, managed to survive. Information and photos for this column are provided by the Clausen Memorial Museum.